Had a great time with my friend Mike at the Art Gallery of Ontario (AGO) in Toronto last night before a sweet send off gathering of dear friends. The show was the first major retrospective in Canada of Jean-Michel Basquiat‘s work.

There was also an Art Spiegelman  retrospective at the gallery. The two exhibits complement each other in many ways – as my friend said (I’m paraphrasing), the one was “low art” that informed “high art,” and the other was vice-versa. 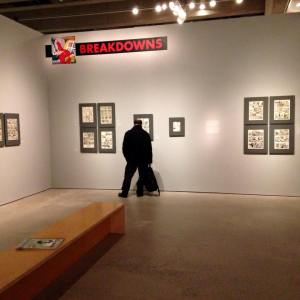 I didn’t realize Spiegelman’s Maus is the first graphic novel by contemporary definition, though I know the book well. I also didn’t realize that he produced a slew of New Yorker covers or that his wife, Françoise Mouly, is the art director for that magazine. So, clearly, I am not nearly the sophisticate I thought I was. Anyway. It’s a terrific exhibit. 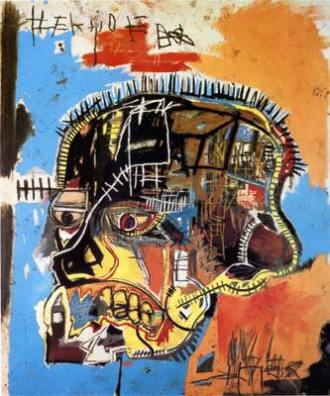 The Basquiat retrospective features some 85 of his works, and they’re even more spectacular than I expected. Of course, his work has more depth, more dimension than perceived in photographs. Many of the paintings felt, to me, more like sculpture. It’s an astonishing body of work, considering that Basquiat died at the tender age of 27 (younger than any of my kids).

I was bothered, throughout the experience, by the nagging idea that the artist would have hated the show. Or maybe just its context.

Framed as a Black History Month offering, part of the show features a hallway through which one must travel in order to get into the next room full of paintings. In that hallway is a recorded excerpt, on an endless loop, from Dr. Martin Luther King’s I Have a Dream speech. It felt, to me – an American liberal who damn near worships the memory of Dr. King – like a kitschy, cheap attempt to force into a square hole a definitively other-shaped thing.

Taking off for London in a minute, via Montreal. Turned my ankle in Toronto earlier and am in a wheelchair. That’s fodder for another post, maybe, someday.